Follow up of all ACST-2 participants will continue until 2026

The results, published today in The Lancet, were announced simultaneously at the

Stroke is the second largest cause of death worldwide, responsible for over six

million deaths each year. A common cause of stroke is carotid artery disease

(also known as carotid artery stenosis), where the large blood vessels that supply

oxygen to the brain become narrower. Usually, this is due to deposits of fatty

material (atherosclerosis) in the arteries which eventually form hardened plaques.

To reduce their risk of having a deadly stroke, patients with carotid artery disease may undergo one of two different procedures to open up the affected artery and improve blood flow to the brain. Carotid artery surgery, also called carotid endarterectomy (CEA), involves surgically removing the plaque, and is more commonly prescribed. Alternatively, the artery may be opened by inserting a catheter with an inflatable balloon tip, and then a stent added to permanently keep the walls open (carotid artery stenting, CAS).

Up to now it has been unclear which of these procedures results in better overall patient outcomes. This includes both the long-term protective effect against strokes, and the risk of an adverse event happening during or immediately after the operation.

To generate robust evidence that could answer this, researchers have coordinated the Asymptomatic Carotid Surgery Trial 2 (ACST-2), the largest trial to date comparing CAS and CEA. The trial, hosted by the Nuffield Department of Population Health at the University of Oxford, enrolled 3,625 participants from 33 countries. Each participant had been diagnosed with carotid artery disease that had not caused  a stroke.

After agreeing to take part in the study, participants were randomly allocated to undergo either CAS or CEA, and followed up for an average of five years. The main outcomes assessed by the trial were adverse events associated with the procedure itself, and the long-term protective effect against strokes.

Principal Investigator for ACST-2 Professor Alison Halliday, Professor of Vascular Surgery in the Nuffield Department of Surgical Sciences, University of Oxford, said: ‘We have shown that, for patients with a severely narrowed carotid artery, stenting and surgery have similar effects on the chances of having a disabling or fatal stroke. The risk from each procedure is about 1%. After that, however, the annual risk over the next five or more years is halved, from 1% down to 0.5% per year.’

Mr Richard Bulbulia, a Consultant Vascular Surgeon, Co-Principal Investigator for ACST-2, and Research Fellow at the Nuffield Department of Population Health, said: ‘Both stenting and surgery are good treatment options, but there may be particular patient factors which favour one approach over another. Until now, it had been unclear if CAS or CEA results in better overall outcomes on the risk of stroke. The evidence from this trial can give doctors confidence in offering the procedure most suited to their patients, knowing that both options are associated with similar very low risks.’ 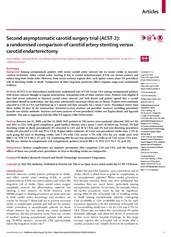 ACST-2 is supported by: